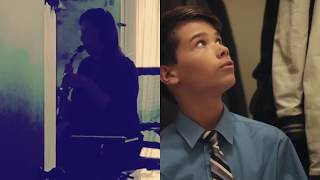 Watch 'More Than Only - the Making of the Original Soundtrack' on YouTube now.

'Home By 8.30' score released on all major streaming services

The score for Home By 8:30 is available now on all major streaming services. Supported by BFI Network, the short film is written and directe

'More Than Only' score album released on Bandcamp

'More Than Only Original Motion Picture Soundtrack' is available HERE on Bandcamp.

The documentary about Norfolk landscape artist, Nial Adams has won the award for Production Craft Skills at the Royal Television Society East awards. The award recognises the huge variety of skills and processes involved in programme production from editing to lighting to sound and music. The award is gratefully received by such a small team, which consisted of Tom Martin's Forward, editor, Michal Zak, colour-grader, Tom Clarke at Molinare, and Tom, Daisy and Dom at Two Twent